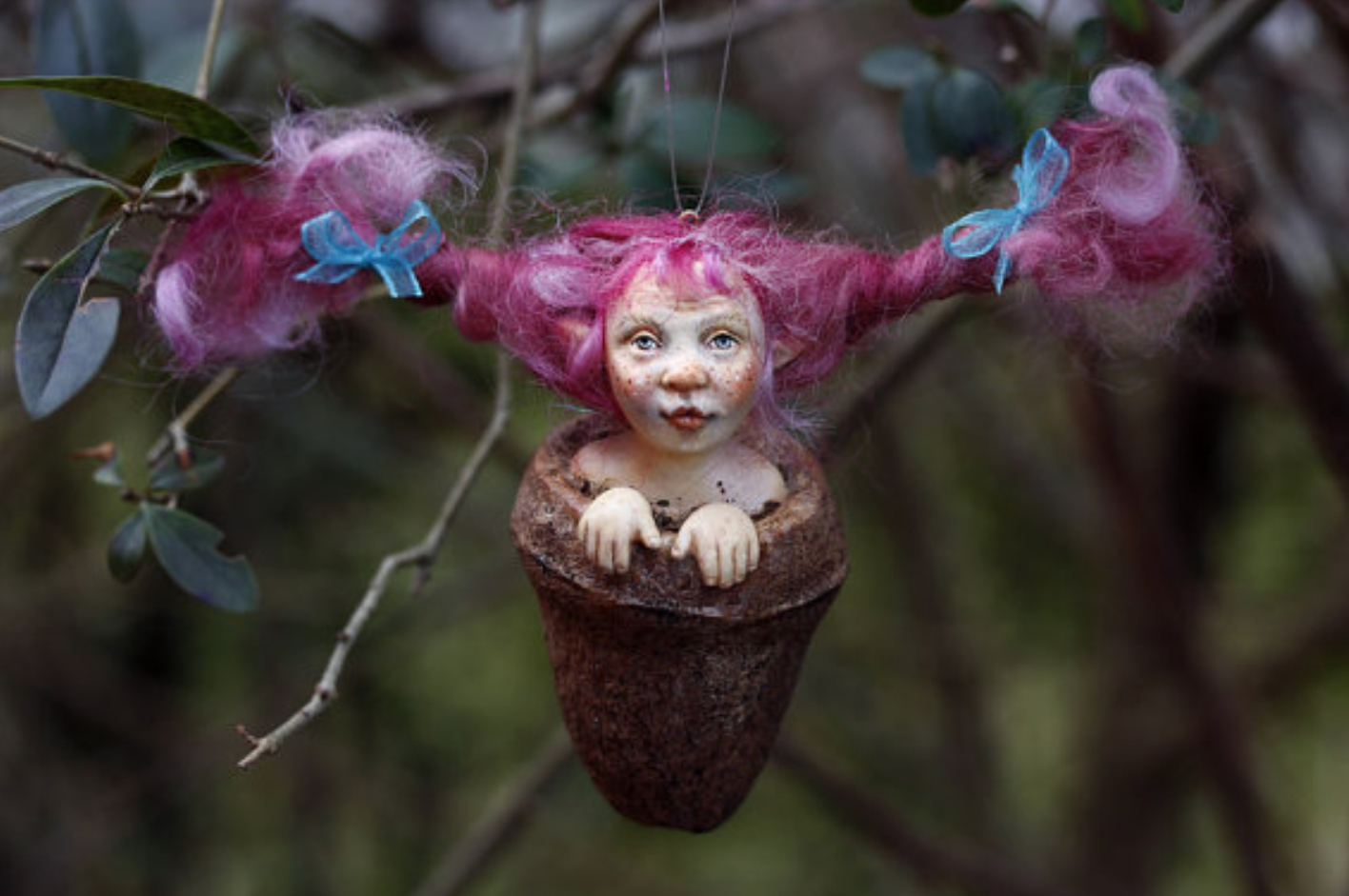 Tatjana’s Raum love for dolls began when she operated her own Boutique some years ago and needed dolls for her shop window.
“I was so fascinated by the gracious figures that i started buying these dolls as well as busts on ebay. The fought of changing or even creating a manikin on my own, led me to search again and again for new materials and ideas. And yet i felt a constant uneasiness and also had the feeling that i hadn’t finished it yet – as if there was something waiting for me”, she explains. “Sometime later i stumbled over miniature figures in the internet and at once felt that I have found the answers to my questions and my quest. Of course it took me a long time in which i untiringly tried out materials and honed my newly acquired arts. During that time the character of my figures or objects became more and more clear. It’s not difficult to tell that the facial features and strong expressions are the focus of my work.”
The material she uses is polymer clay. With it she is able to model the faces so realistic that they come to life. Since her figures are connected with the earth, Tatjana Raum loves combining them with Mother Nature’s goodies. A piece of wood for example, becomes an accessory, such as a seat, and a piece of bark becomes a hat. These gifts of nature are always unique and enhance the individuality of each creation. Nevertheless: the most important part of the creations is the face. Not only with the dolls is that the case but also in her everyday life she masters it with her openness and zest for life. “I often catch myself, staring so intent at, for me an interesting face, in order to catch each and every expression. I often can’t follow in the conversation; therefore embarrassing situations are sometimes unavoidable.”

Tatjana Raum lives with her husband in the beautiful Chiemgau area, where others come for vacation. It lies between many small lakes, you can imagine that this scenery is home to those gracious winged elves, smart forest pixies, and other little mythical creatures from another world, whose fleeting traces are captured with the polymer clay by the artist.

The artist loves taking a stroll or going for a bike ride through the tiny Bavarian towns, where one garden is more beautiful then the next. “Taking a dip in a cold lake during  the fall, where barely another person dares to venture in, that and many other little things of my daily life give me strength I need to provide me with the perfect balance for my work.”
Her figures are earthy and in some way mystical and also seem very, very alive and real. It’s always fascinating for the artist to catch a character for a new figure. “Individual and distinctive expressions let each of my figures become their own personality. When I take a first look in the eyes of my ‘being’, then I get this magical moment between us as if it were the first meeting with the unknown and yet there is still a familiarity towards this creature.”
Tatjana has been displaying and selling her art under the name “Chopoli” as an independent artist in the web.
“The immediate positive responses per e-mail and the so called “feed back” have always been overwhelming and have given me strength on my way”. Next to the already successful business in the virtual world she would like to establish options for collectors and those interested in getting to know her art.
Her “doll-award” which was given to her in Neustadt near Cobourg, is the most astonishing proof that she has found a strongly interested in getting to know her art.
Let’s hope many doll-collectors will be able to find the perfect spot for one of her delicate, 20-30 cm tall creatures. [1]