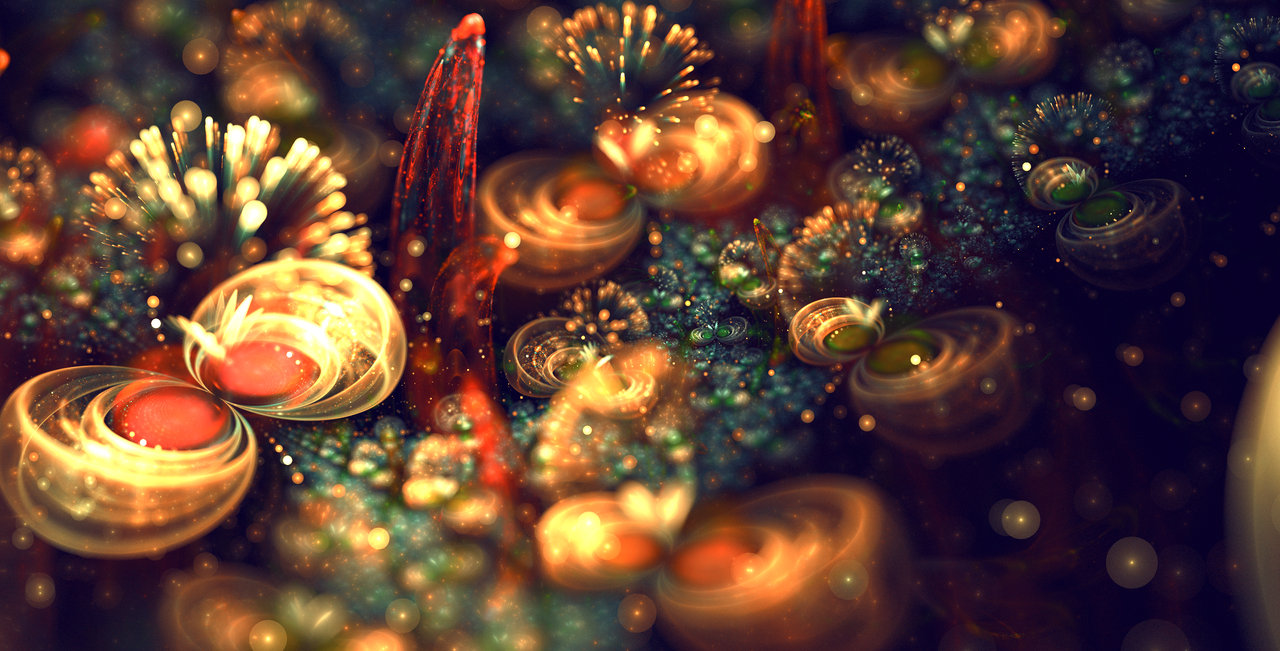 Fractals are truly mesmerizing and found all over nature, spanning a huge range of scales. We find the same patterns again and again, from the tiny branching of our blood vessels and neurons to the branching of trees, lightning bolts, and river networks. Regardless of scale, these patterns are all formed by repeating a simple branching process.
A fractal is a picture that tells the story of the process that created it.
Other said  a fractal is a never-ending patterns that are self-similar across different scales. They are created by repeating a simple process over and over in an ongoing feedback loop. Driven by recursion, fractals are images of dynamic systems – the pictures of Chaos. Geometrically, they exist in between our familiar dimensions. Fractal patterns are extremely familiar, since nature is full of fractals. For instance: trees, rivers, coastlines, mountains, clouds, seashells, hurricanes and galaxies.
Abstract fractals – such as the Mandelbrot Set – can be generated by a computer calculating a simple equation over and over, feeding the answer back into the start. These fractals are infinitely complex, meaning we can zoom in forever.

Not only are fractals in the world all around us – they are even inside us! In fact, many of our internal organs and structures display fractal properties.
Neurons from the human cortex. The branching of our brain cells creates the incredibly complex network that is responsible for all we perceive, imagine, remember.

Our lungs are branching fractals with a surface area ~100 m2. The similarity to a tree is significant, as lungs and trees both use their large surface areas to exchange oxygen and CO2.

Branching fractals can be seen also in lichtenberg “lightning”, formed by rapidly discharging electrons in lucite.

Or trees for example, formed by a sprout branching, and then each of the branches branching again, etc.

Much like the circulatory system in the body, the planet Earth has also fractal river networks that transport rainfall from the land to the oceans. Like all fractals, these complex, self-similar patterns are formed by the repetition of a simple process over and over. In the case of a river network, it is formed by rain falling and then flowing down hill. Erosion occurs, which forms a small channel, and then the next time rain falls it will follow the same path, and carve the channel a little bit deeper. Erosion is very powerful, but very slow. One of the remarkable properties of a river network is that it collects a huge amount of rainfall from a very large land area and condenses it into a small area. This explains how a river can keep flowing, even when it hasn’t rained recently in the vicinity. It may have rained somewhere hundreds of kilometers upstream along one of the tributaries.

A simple organism,  nautilus built its spiral shell by adding pieces that grow and twist at a constant rate.

A hurricane is a self-organizing spiral in the atmosphere, driven by the evaporation and condensation of sea water.

A spiral galaxy is the largest natural spiral comprising hundreds of billions of stars.

The spiral aloe is full of spirals. It forms its spiral by growing new pieces rotated by axed angle. Many other plants form spirals in this way, including sun owers, pinecones, etc.

A fiddlehead fern is a self-similar plant that forms as a spiral of spirals, of spirals.

This variant form of cauliflower is the ultimate fractal vegetable. Its pattern is a natural representation of the Fibonacci or golden spiral, a logarithmic spiral where every quarter turn is farther from the origin by a factor of phi, the golden ratio.

Phyllotaxis is the botanical study of the arrangement of phylla (leaves, petals, seeds, etc.) on plants. More than four centuries ago, the great astronomer Johannes Kepler noticed the spiral patterns on plants but no satisfactory explanation has emerged until recently.
Phyllotactic spirals form distinctive patterns in a variety of plants. For example, the leaves are often arranged in a helical pattern, as if winding around the stem. On pineapples, the hexagonal fruits fit together in interlocking families of helical spirals. The numbers of spirals are successive Fibonacci numbers like 5, 8 and 13.
Sunflowers, which belong to the daisy family, usually have 55, 89 or 144 petals, and spiral patterns are evident in their seeds.
Biologists described long ago how the phylla are arranged, but explaining why these patterns form is much more difficult, and it is only recently that real progress has been made. Classical explanations of phyllotaxis appeal to optimisation principles, but do not account for how these optima are achieved. (read more about the maths behind the efficient packing of sunflowers and many other plants here).

Purely geometric fractals can be made by repeating a simple process.
The Sierpinski Triangle is made by repeatedly removing the middle triangle from the prior generation. The number of colored triangles increases by a factor of 3 each step, 1,3,9,27,81,243,729, etc.

The Koch Curve is made by repeatedly replacing each segment of a generator shape with a smaller copy of the generator. At each step, or iteration, the total length of the curve gets longer, eventually approaching infinity. Much like a coastline, the length of the curve increases the more closely you measure it.

I recently discovered some amazing geometric fractals, namely Fabergé Fractals made by Tom Beddard. If you are interested to find out more about his works, read this article.

We can also create fractals by repeatedly calculating a simple equation over and over. Because the equations must be calculated thousands or millions of times, we need computers to explore them. Not coincidentally, the Mandelbrot Set was discovered in 1980, shortly after the invention of the personal computer.

How does the Mandelbrot Set work?

We start by plugging a value for the variable ‘C’ into the simple equation below. Each complex number is actually a point in a 2-dimensional plane. The equation gives an answer, ‘Znew’ . We plug this back into the equation, as ‘Zold’ and calculate it again. We are interested in what happens for different starting values of ‘C’.
Generally, when you square a number, it gets bigger, and then if you square the answer, it gets bigger still. Eventually, it goes to infinity. This is the fate of most starting values of ‘C’. However, some values of ‘C’ do not get bigger, but instead get smaller, or alternate between a set of fixed values. These are the points inside the Mandelbrot Set, which we color black. Outside the Set, all the values of ‘C’ cause the equation to go to infinity, and the colors are proportional to the speed at which they expand.

The interesting places in this fractal are all on the edge. We can zoom in forever, and never find a clear edge. The deeper we explore, the longer the numbers become, and the slower the calculations are. Deep fractal exploration takes patience!

The great value of fractals for education is that they make abstract math visual. When people see the intricate and beautiful patterns produced by equations, they lose their fear and instead become curious.

Exploring fractals is fun, and we can play with the equations to see what happens. The 4 images above are algebraic fractals known as Julia Sets. The first image (e.g.Z2) comes from the same equation as the Mandelbrot Set, Z = Z2 + C. When we raise the ex- ponent to Z3 (i.e. Z*Z*Z), the Julia Set takes on a 3-fold symmetry, and so on. The degree of symmetry always corresponds to the degree of the exponent.

Just as we find branching fractals in nature, we also find branching within algebraic fractals like the Mandelbrot Set. Known as “Bifurcation”, branching in these fractals is a never-ending process. The four images below are successive zooms into a detail of the Z = Z2 + C Mandelbrot Set. Two-fold symmetry branches and becomes 4-fold, which doubles into 8-fold, and then 16-fold. The branching process continues forever, and the number of arms at any level is always a power of 2.

If we explore other algebraic fractals, we find similar patterns and progressions. The two images below are details from the Z = Z3 + C Mandelbrot Set. Since the equation involves Z cubed, the arms now branch in 3-fold symmetry. Each of the 3 arms branches into 3 more arms, becoming 9-fold symmetry. This then trifurcates into 27 arms, 81, 243, etc. where the number of arms is always a power of 3.

Again, the educational value of fractals is that they make the behavior of equations visible. Zooming into fractals, math ceases to be intimidating, and instead becomes entrancing.

How big or small are fractals?

Mathematical fractals are infinitely complex. This means we can zoom into them forever, and more detail keeps emerging. To describe the scale of fractals, we must use scientific notation:

Because of the limits of computer processors, all the fulldome fractal zooms stop at a magnification of 1016. Of course the fractals keep going, but it becomes much slower to compute deeper than that. 1016 (or ten quadrillion) is incredibly deep. To put it in perspective, the diameter of an atom is about 10-10 meters, so as we zoom six orders of magnitude smaller, we’re looking at things a million times smaller than an atom!
Or, to look at it another way, as we zoom into the fractals, the original object keeps growing. How big does it get when we have zoomed in 1016 times? The orbit of the dwarf planet Pluto is about 1012 meters in diameter. If we start zooming in a 10 meter dome, then the original image grows to a size larger than our entire solar system – 100,000 times larger!
All of these zooms are just scratching the surface of the infinitely complex. Some fractals, like the Mandelbrot Set, become even more intricate and beautiful the deeper we explore.

What are fractal useful for?

Nature has used fractal designs for at least hundreds of millions of years. Only recently have human engineers begun copying natural fractals for inspiration to build successful devices. Below are just a few examples of fractals being used in engineering and medicine.

A computer chip cooling circuit etched in a fractal branching pattern. Developed by researchers at Oregon State University, the device channels liquid nitrogen across the surface to keep the chip cool.

A tree grows by repetitive branching. A fractal triangle is formed by a simple repetition. The infinite Mandelbrot Set is formed by repeating a tremendously   simple calculation. Simplicity leads to complexity. A fractal tells a story of the processes that created it.