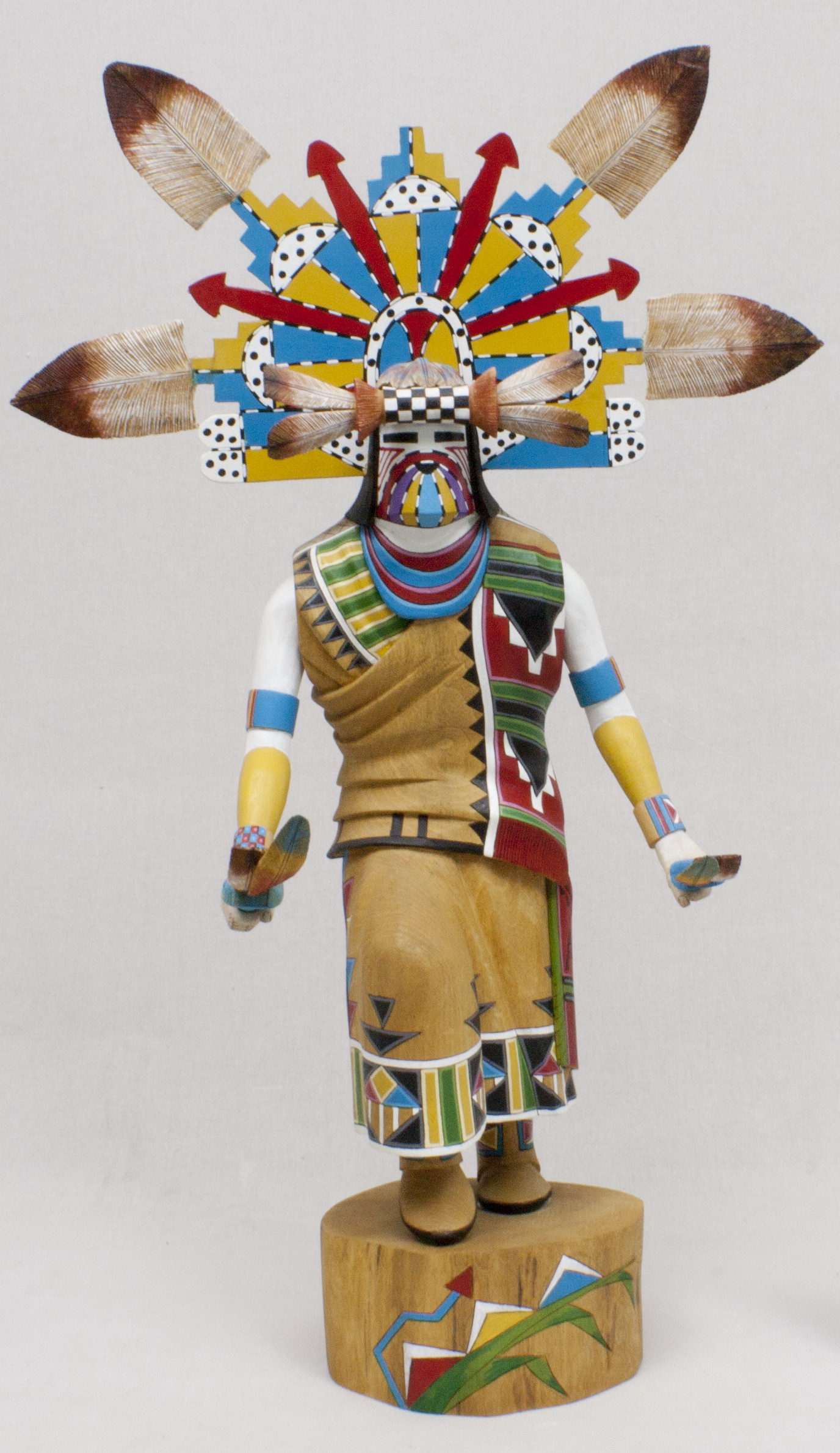 Hopi Kachina dolls are are made by Hopi, Native American people of northeastern Arizona. In their belief, Kachinas are the spirits of deities, natural elements or animals, or the deceased ancestors of the Hopi.They believe that every year, in time from winter solstice to mid-July, these spirits come as messengers of gods to the villages to dance and to sing, to bring good rains for the harvest and to bring gifts to the children. Before Kachina ceremonies begin, men of the villages make Kachina dolls in the shape of the Kachina. These dolls are then given to the children of the village during the ceremony by the Giver Kachina. Dolls are then hung on the walls and studied by children so they can learn about Kachinas.
Oldest known Kachina doll is from the 18th century and was very simple in design. It was made as a flat object with stylized shape of a head and some body paint. Most of the Kachina dolls were invented in the late 19th century and can be separated chronologically by their look in four periods: the Early Traditional, Late Traditional, Early Action and Late Action periods.
The Early Traditional Period lasted from 1850 to 1910. In that time were made the most primitive forms of the kachina dolls. The body of the doll was carved from one piece of the cottonwood root while the facial features were made from different glued parts. Texture of the doll was rough and the doll was painted with mineral and vegetable pigments.
The Late Traditional Period was from 1910 to 1930 and kachina dolls made in that time were more realistic with better proportions and more detailed carvings and paintings.
Kachina dolls of Early Action period (between 1930 and 1945) became more articulate with arms detached from the body and the head that can be turned so the whole doll can be placed in the action.
In the Late Action period (from 1945 until today), kachina dolls change the most. They became wholly articulate, with better body proportions, with stands so that they don’t have to be hung from walls and generally more adjusted to the needs and tastes of the tourists. Today, kachina dolls are made without feathers of the rare birds because of the ban so the feathers are carved into the wood. They are also highly priced collection items.
Traditional kachina dolls are made if four forms:
Putsqatihu dolls that are made for infants. They are stylized flat figures with enough distinguished elements that they can be recognized as Kashina.
Putstihu taywa’yla: kachina dolls that have stylized flat bodies but are made so that they have three dimensional faces and are are made as gifts for toddlers.
Muringputihu are kachina dolls made for infant girls. They are made to have cylindrical body and detailed carved head.
Tithu are katchina dolls made for girls that are two or more years old. They are full bodied dolls.
Beside the traditional form of dolls there is a modern form of miniature kochina doll made for trade.