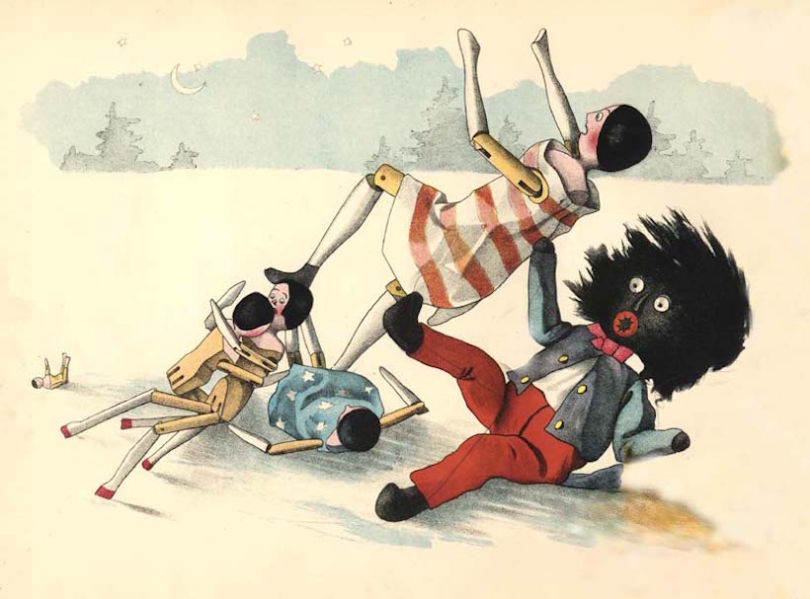 The first use of the character in Upton’s book The Adventures of Two Dutch Dolls and a Golliwogg. (Image: Bertha Upton)

The golliwog, golliwogg or golly is a black fictional character created by Florence Kate Upton that appears in children’s books in the late 19th century usually depicted as a type of rag doll. It was reproduced, both by commercial and hobby toy-makers as a children’s toy called the “golliwog”, and had great popularity in Europe and Australia into the 1970s. The doll is characterised by black skin, eyes rimmed in white, clown lips and frizzy hair. Though home-made golliwogs were sometimes female, the golliwog was generally male. For this reason, in the period following World War II, the golliwog was seen, along with the teddy bear, as a suitable soft toy for a young boy.
The image of the doll has become the subject of controversy. While some see the golliwog as a cherished cultural artefact and childhood tradition, others argue that the golliwog is a destructive instance of racism against people of African descent, along with pickaninnies, minstrels, mammy figures, and other caricatures, and it has been described as “the least known of the major anti-Black caricatures in the United States”. In recent years, changing political attitudes with regard to race have reduced the popularity and sales of golliwogs as toys. Manufacturers who have used golliwogs as a motif have either withdrawn them as an icon, or changed the name. In particular, the association of the golliwog with the pejorative term “wog” has resulted in use of alternative names such as “golly” and “golly doll”.
© wikipedia.org