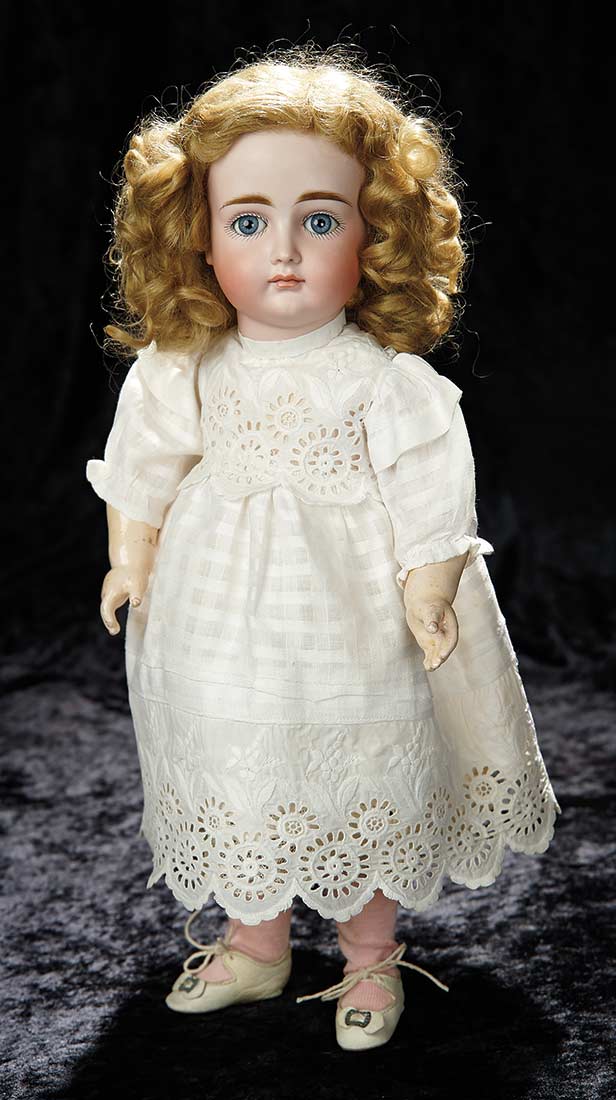 Porcelain doll (or so-called bisque doll) is a doll that is wholly or partially made out of bisque porcelain, a type of porcelain that is unglazed and matte. Bisque dolls were the most popular from 1860 to 1900 in France and Germany and became fashionable after china dolls who have glazed texture. Bisque dolls have matte texture and are more skin-like. They were initially made as children’s toys but in time became collectible and today they can be worth thousands of US dollars.
Bisque dolls are rarely made completely out of bisque because that makes them heavy and fragile. The most often they are made from the combination of materials. The head of the doll is always made from bisque but body is made of cloth, leather, wood (with joints), papier-mâché or composition, which is a material made of pulp, sawdust, glue, cornstarch, resin and wood flour. Eyes of dolls are made of glass. Head is painted in many layers in order to get skin tones and facial expressions.
First porcelain doll manufactured in Europe were china dolls. They were made mainly in Germany between 1840 and 1880 from glazed porcelain and with painted hair. From 1850, Germany manufactured parian dolls – white porcelain dolls that were not glazed before firing which gave them matte texture. They also had painted hair. Manufacturing of bisque doll began in 1860s in France and Germany and continued well after World War I. Most famous French companies that manufactured bisque dolls were Jumeau, Bru, Gaultier, Rohmer, Simone and Huret while heads for dolls were mostly made in Germany. They soon became very popular because of their matte texture that was closer to human skin than glazed porcelain and because they had more natural hair. Bisque dolls had wigs made from human hair or “mohair” – the hair of the Angora goat. First bisque dolls were fashion dolls. They represented grown up women in modern (for the time) clothes and were intended for children of wealthy parents. There were parts of the industry that functioned on making only clothes for dolls. Near the end of the 19th century childlike dolls started taking over the market and becoming very popular. The most popular were French Bébés dolls high quality dolls made very skillfully. When German makers started making less expensive dolls they took over the market so French makers were forced to unite into consortium. Germany dolly-faced dolls were made by companies Armand Marseille, Simon and Halbig, K*R, and Kestner many of which were placed in the Thuringia region, which has natural deposits of the clay used to make the dolls. In the early years of the 20th century companies like Kämmer and Reinhardt, Heubach and Kestner started making “character-faced dolls” which were more realistic and expressive childlike dolls. At about the same time production of bisque dolls began in the United States and Japan too. During 20th century, making of dolls turns from industrial production to hobby and again to industrial production in 1980s. Now, older bisque dolls can be valuable collectable items.