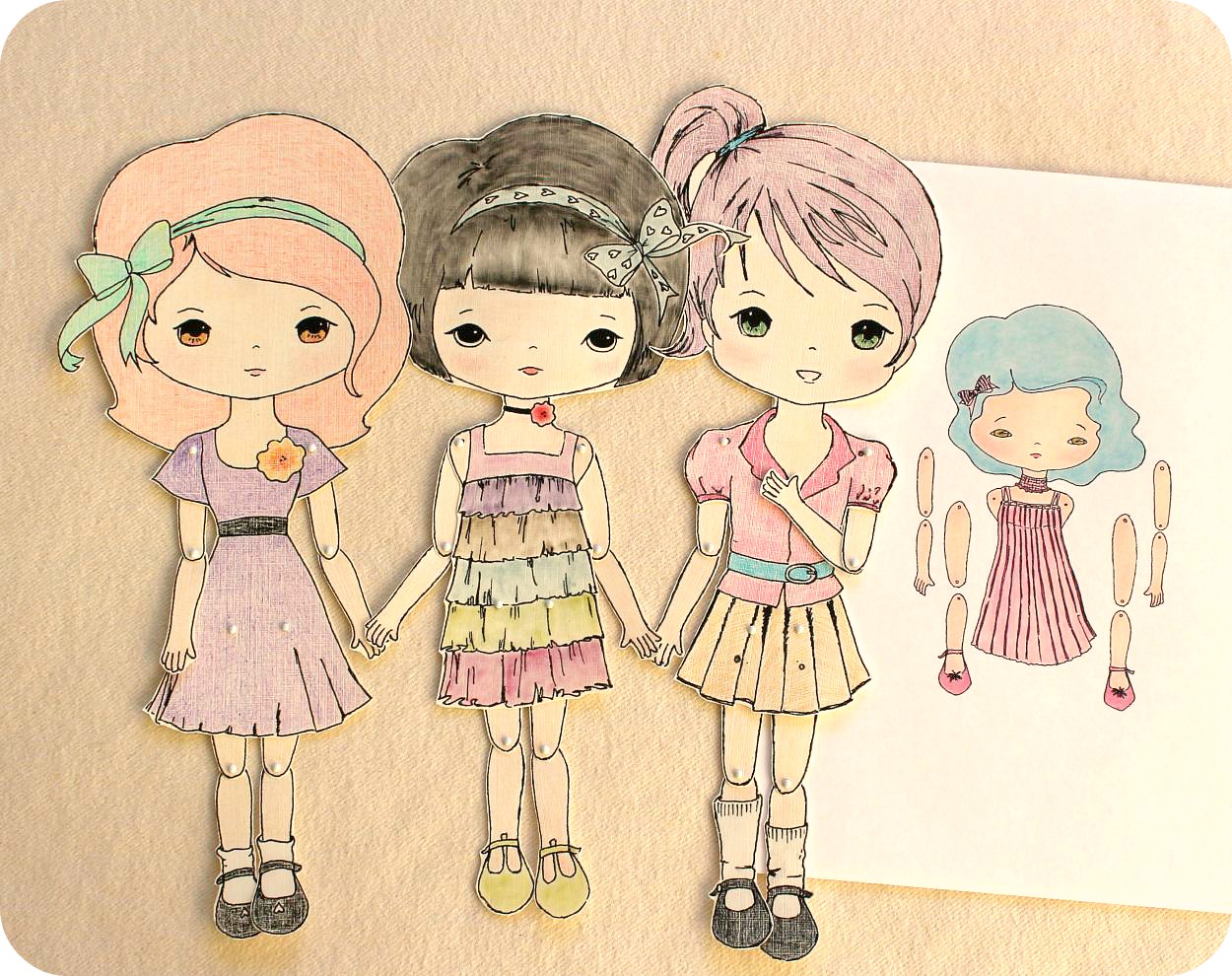 Paper doll is a two-dimensional doll made out of paper or light card and cut out. It can have separate clothes made also from paper and holding onto a doll with tabs. They can be in shape of a person, animal or an object.
Before they were made in the shape that we know them today there were some or other forms of paper dolls since there was paper. Asian cultures used paper images in ritual and Japan had art of Origami since 9th century. Paper and leather puppets were known on Bali since before Christianity. Main difference between these kinds of paper dolls and modern ones is that clothes were not made for them. First paper dolls in Europe were made in France in 18th century. They were made of jointed paper and were called “pantins”. They were made in human form and had assorted clothes in accordance with the fashion of the time. They were hand painted and some of them can still be found in museums today. First manufactured paper doll was Little Fanny and produced by S&J Fuller in London in 1810. First American manufactured paper doll was made in 1812 and called “The History and Adventures of Little Henry”. It was published by J. Belcher of Boston. Paper dolls in the United States were also made by McLoughlin Brothers. They sold to Milton Bradley firm in 1920s and from that moment paper dolls became very popular in United States and even more so after that. They were made in shapes of movie stars and celebrities such are Ava Gardner, June Allyson, Tyrone Power, Betty Hutton, Claudette Colbert, Greer Garson, Sonja Henie, Mary Martin, Judy Garland and many others. These are now very popular with collectors.
Paper dolls became collectable and some of them can reach prices from $100 to $500 for very sought dolls. Uncut ones always have better price than cut, no matter how good condition cut are in.
Early paper dolls had printed on clothes. In time, paper dolls were made to have printed underwear on them and multiple layers of interchangeable clothes printed in latest fashion that held to the dolls with tabs.
Between 19th and 20th century paper dolls were used by department stores as fashion advertisement. Paper dolls started appearing in ladies magazines and helped sell clothes and other items such are coffee, flour, chocolate, sewing machines, nail polish, underwear, fabrics, cars, soaps and threads. When comic books started appealing to the female market, paper dolls started appearing in comic books too. Some paper dolls were inspired by comic book characters.
Age between 1930s and 1950s can be called “Golden Age of Paper Dolls”. During the Depression paper dolls were still affordable by all and after the World War 2, paper was not affected by rationing and shortages so paper dolls were still manufactured.
Today paper dolls and their costumes are important to historians because they provide a broad look at cultures around the world and the fashion of the times.
© 2016 History of Dolls