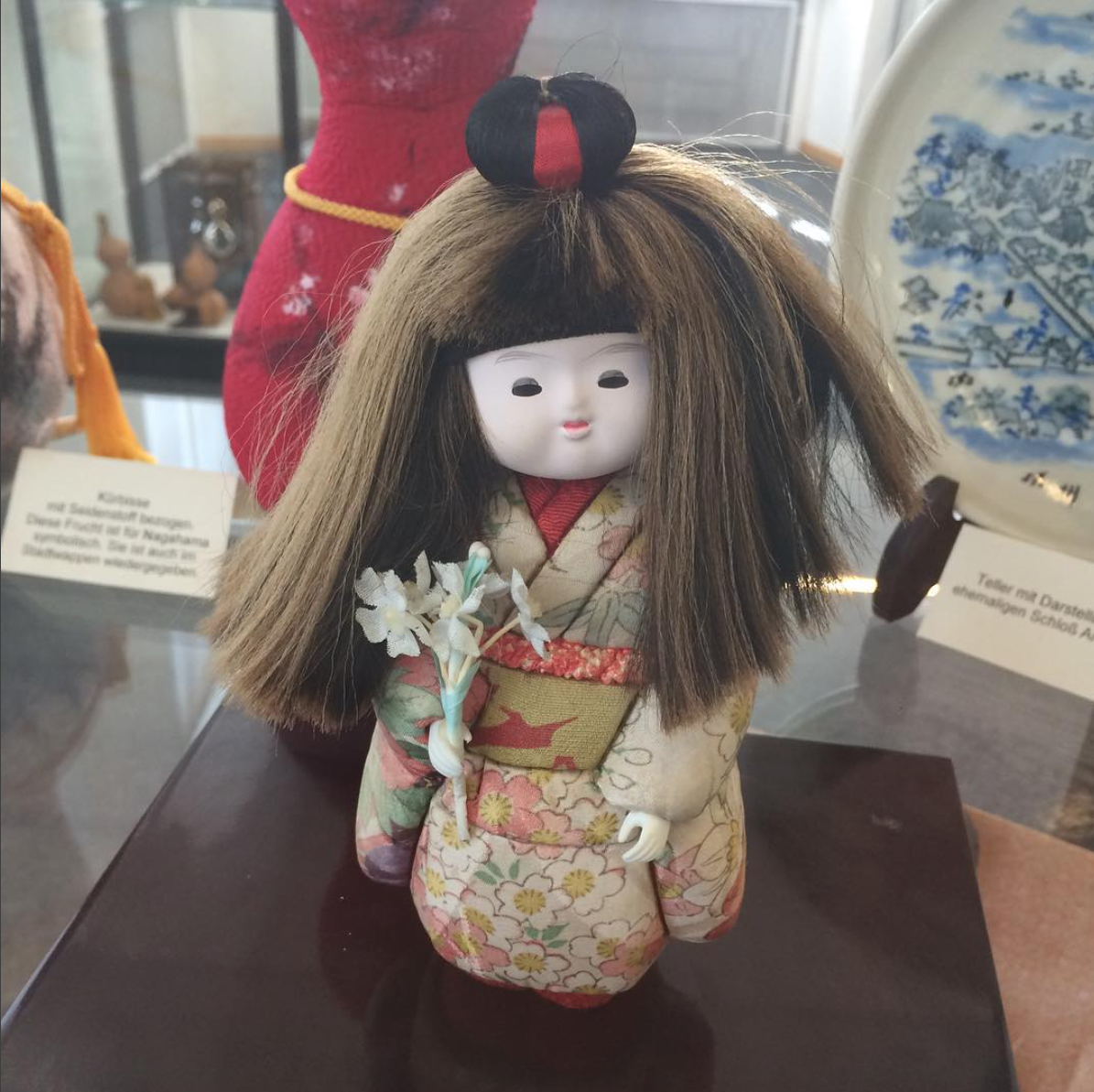 Doll from the Kabuki Theater. Now in the collection of Town Hall from Augsburg, Germany. © kreativ løve

There are many kinds of Japanese traditional dolls but they are, all together, commonly known as “ningyō”, which means “human shape”. They are made to represent children, babies, imperial court and common people, warriors, heroes, characters from fairy-tales, gods and demons. They are made for house shrines, as gifts or for festivals such are “Hinamatsuri”- the doll festival, or “Kodomo no Hi” – The Children’s Day.
Oldest known Japanese dolls originate from Jōmon period, a time in Prehistoric Japan from about 14,000 BC to about 300 BC, when Dogū, humanoid figures were made. They represented gods and were used in rituals. In Kofun period, around 300-600 AD, the Haniwa were made terracotta funerary figures. They were grave offerings and were made in shape of people, animals and objects. 11th century and the Heian period, known for several types of dolls that were used for playing, in rituals and for protection from bad spirits. Many periods had idea that dolls can trap bad spirits and be used as a protection of the person who carries the doll. Okiagari-koboshi, roly-poly toys made from papier-mâché are first time made in 14th century and were used as good-luck charms and as symbols of resilience. Production of dolls expanded in Edo period from 1603 to 1867 when number of doll makers increased as well as number of wealthy individuals who sought beautiful dolls for gifts and display. Dolls became larger and more complicated and detailed. Trade of dolls became so competitive that it had to be regulated by government and regulations ruled materials used for doll-making and height of dolls. Many new types of dolls were invented in Edo period. For Hinamatsuri, the doll festival on March 3, are made Hina dolls which have pyramidal bodies stuffed with straw or wood blocks, a hands and head of carved wood and set-in glass eyes and human or silk hair. Set of Hina dolls consists of Emperor, Empress, three court ladies, five male musicians, two ministers and three samurai. Musha or warrior dolls are made in similar way as hina dolls but much more complex because they represent figures that stand or ride horses with armor and weapons. Gosho dolls represent fat simplified babies carved in one piece.
Daruma dolls are spherical dolls painted red and white which represent Bodhidharma, founder of Zen. It is believed that they bring luck.
Kokeshi dolls are simple wooden toys. They have cylindrical body and represent little girls. Now are very famous souvenirs. Ichimatsu dolls, named after an 18th-century Kabuki actor, represent little girls or boys in elaborate kimonos and are made to be held in arms, dressed, and posed.
In the 1920s and 1930s silk-skinned or “mask-face” dolls became very popular because they allowed making of custom kimonos for them. In time they become interesting souvenirs for soldiers after World War 2 and for tourists. Anesama ningyō, shiori ningyō and their successor shikishi ningyo, dolls are made from washi paper. They have hairstyles and costumes made of high-quality paper and often lack facial features.