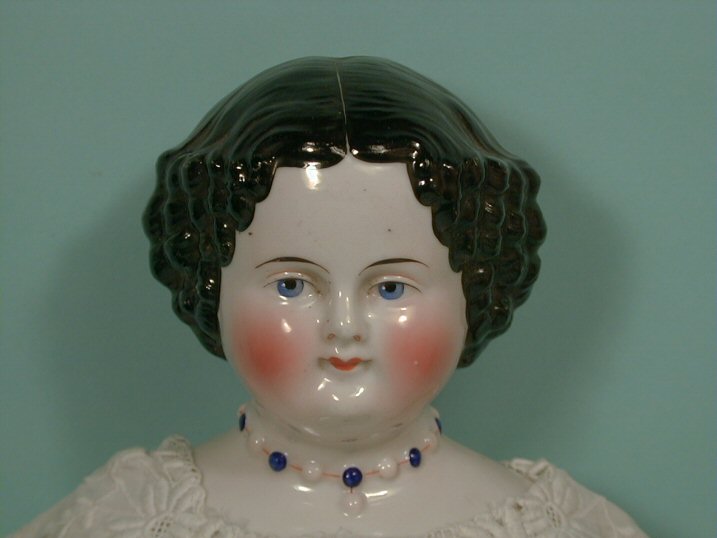 China doll is a type of porcelain doll made wholly or partially of glazed porcelain. They were mainly made in Germany between 1840 and 1940 and were very popular between 1840 and 1890. They were also made in Poland, Czechoslovakia, France, Denmark and Sweden. The most famous manufacturers of china dolls were manufacturers Kestner, Conta & Boehme, Kling, Kister, KPM, Meissen, Alt, Hertwig and Beck & Gottschalck. China dolls are often made so that they have porcelain head and a body from cloth, leather or wood. They were sometimes made completely out of porcelain and sometimes with head and limbs out of porcelain with body from another material. They were made in different sizes from 3cm to 80 cm in height. Like with other types of porcelain dolls, at first china dolls were made to look like grown women with painted molded hair and face. From 1850s they were made to look like children and became very popular. In time, manufacturers also started selling dolls in parts or kits so the buyers could make their own dolls and dress them how they wanted to. Antique china dolls are now collector items especially rare and detailed ones.
China dolls became popular again in the middle of the 20th century and companies in the United States begun reproducing them. Hobbyists also began reproducing china dolls with bought or made molds and in low fired ceramic. These dolls can look like originals but are different because of their poor painting and they can be crazed in the glaze due to poor firing technique. One more type of chine dolls that could be easily mistaken for antique china dolls are dolls made in Japan in 20th century. They have heads market with labels and were sold in The United States in kit form. China dolls marked with “Germany” are younger than 1891 because in 1890 was passed “McKinley Tariff Act”, the law that says that goods must be marked with the country of origin. Dolls marked with “made in Germany” are younger than 1921 because that is when the law was passed that mark must have “made in” part. But most of dolls are unmarked or have generic marks like size so the dolls are described and identified in collector circles by their hairstyles. As fashion changed so changed the hairstyles of the dolls which can give clue about from which period the doll originates.
© 2016 History of Dolls